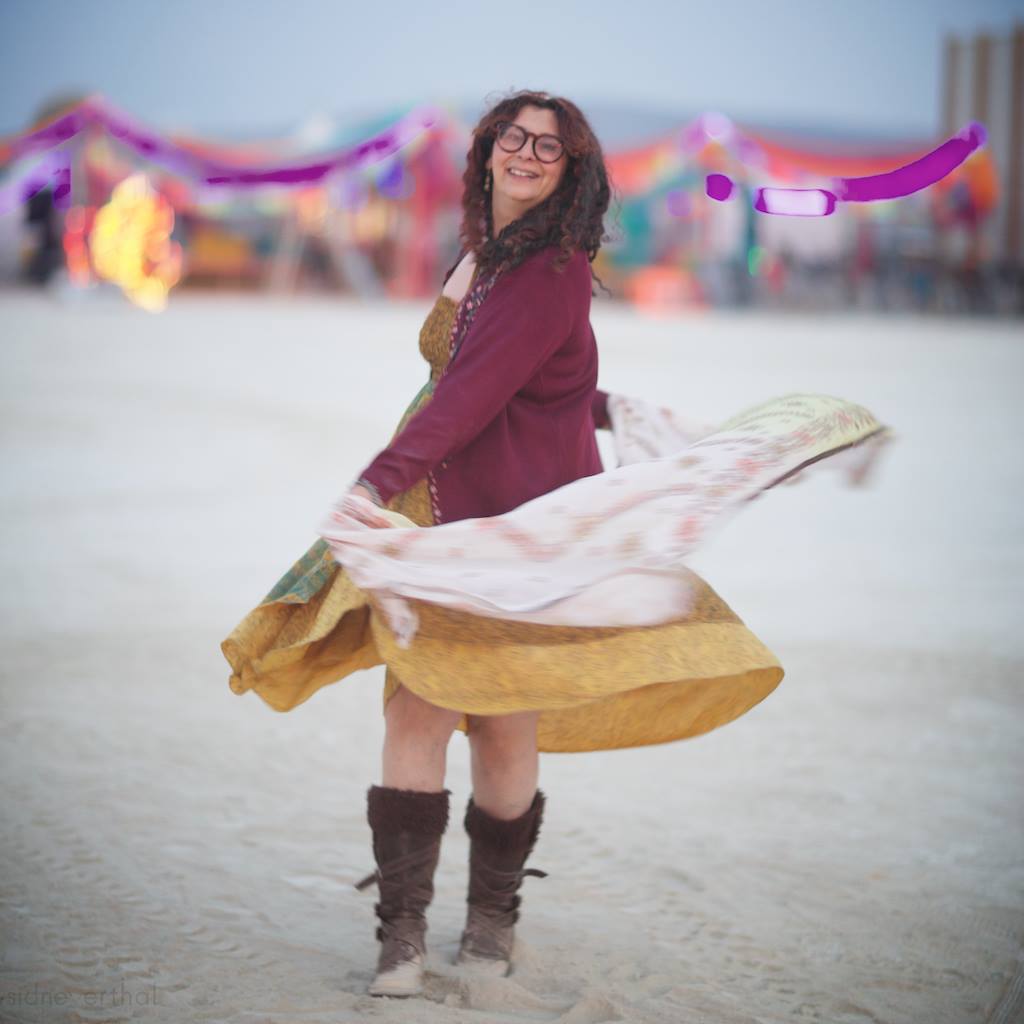 Because I have so many Jewish friends, I feel a special connection to their religion and culture. Also, as someone who is religious, I feel deeply honored to have visited synagogues, attended weddings, seders, a bris and a brit bat. Although I’m still hoping to attend a bar/bat mitzvah in my lifetime!

Here is an interview of Glenda, who is a central member of my Burning Man family. I scoured Glenda’s Facebook page and found wonderful vintage photos that I’ve sprinkled throughout the interview. I hope you enjoy reading about her background and viewing her pictures as much as I did. This one’s a true treasure trove.

I am a native of San Francisco and have lived here for my whole life, except for six years. I live in the neighborhood I grew up in, the Richmond district. My current job is an Activity Coordinator, working mainly with senior residents of The Sequoias who live in the Memory Care.

Why are you Jewish? Was the religion passed down? Did you discover it?

I grew up with a Roman Catholic father and a Jewish mother, as well as a Jewish grandfather. My mother and grandfather fled Hungary after the Holocaust. Our parents exposed us to all religions; we attended all sorts of services and went to different Sunday schools. Judaism seemed to make the most sense to me and my sister, Janey. Our other sister is eight years younger than me and she had a different experience, which I’m not really sure what that was. My father obviously was cool with our choice (after all he did marry a Jewish woman).

What does it mean to be Jewish? What is unique about the faith?

I think what makes Judaism unique is that Jews as a culture value knowledge, creativity, curiosity and having a moral stance on everything. As A Jew I feel that I have invisible ties that go back centuries.

I attended services with my family on holidays as well as celebrated rituals at home. I didn’t go to Hebrew school or Saturday school. Right now where I work, I often bring residents to Torah studies, which happen once a month. It’s quite fun to sit around with a group of senior Jews from all over the world and discuss these biblical stories.

What are the pros and cons?

I don’t know; I’m proud to call myself a Jew and don’t feel any pros or cons about it.

What are the misperceptions about Judaism or the people?

I think we are thought of as a group of people who are feared by many for some strange, complicated reasons going back to ancient times. Jews have learned to survive in every part of the world through hard work and often assimilation which can be confusing. I once saw a documentary in which the Dali Lama sat down with a group of rabbis and asked them how they have survived away from their homeland.

I believe in heaven and that the spirits of loved ones are all around us.

Never really had one.

Have you been to Israel and if so, can you tell me about that experience?

I haven’t been to Israel.

Can you give me your perspective on the Israel-Palestine conflict?

I think it’s a horrible situation that I hope one day comes to a peaceful and harmonious end. After all, if biblical history is correct, we stem from the same father. It’s through the maternal line that the difference occurs.

How has the Trump presidency affected you or your religion or your beliefs? Whatdo you think of his daughter and son-in-law being practicing Jews? Does that help relations with Netanyahu?

I think the whole Trump family is wrecking whatever advances have been made, in the name of greed and stupidity.

What questions do you have about other religions?

Often other religions don’t make sense to me, why they believe what they believe and that includes atheists and skeptics.

Since everyone is unique, there will be that much more to learn.

Is your youngest sister also a practicing Jew?

My youngest sister is a Sufi right now.

Who in your religion do you admire or look up to?

The person I most admire is Rabbi Alvin Fine who clarified so much for me as a child….during a service he would speak about the world in such a kind, loving, and intelligent way. Between him and my grandfather who I loved deeply, I wanted to be a part of their world.

What denomination are you? Orthodox, Conservative, Reform? Am I characterizing that correctly?

I guess I’m a Reform Jew……when my great-aunt visited from Hungary when I was a teenager, we took her to Temple Emanu-El and she thought it was a church….I think she was Orthodox…….she only spoke Hungarian and German, possibly some Hebrew.

Is your husband Jewish? Do you incorporate him in your faith in any way?

My husband is an atheist but he joins in our celebrations…….growing up I’d say a majority of his friends were Jewish so he was familiar with our customs…..one of his friends’ father was a rabbi.

If someone wanted to learn more about being Jewish, what resource(s) would you point them to?

My mom had me read a book as a teenager called “Jews, God and History”……I don’t know really what else to suggest….I find that there are many ways to be a Jew and just talk to as many Jews as possible and if you have a chance to attend a Passover Sedar or a Channukah celebration by all means go……music, food and lively discussions!

I want to add that my father, who was Catholic, admired Alan Watts….he also visited a soothsayer and found out he might have been a Jew in a past life………as you can see my family is all over the map when it comes to spiritual matters…….highly entertaining childhood!