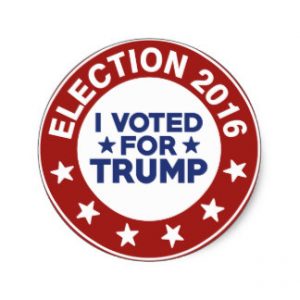 In an effort to move beyond my political bubble, I tried to research conservative blogs similar to mine, but had a hard time finding someone I could relate to. So I put a call out to a blog group and Jenni from Mama Plus One enthusiastically emailed, “I Voted Trump!”

When it crossed my inbox, it made me so happy because I love opinionated people. As you’ll see from Jenni’s responses, I was floored by her thoughtfulness and insight, so much so that I responded back, “Oh goodness, Jenni, I love you!”

I feel honored and blessed to have connected with someone who has so much heart. I’m excited to share what Jenni has to say. Unedited.

Jenni from Kansas City, KS Mama Plus One

Below you’ll find the responses I had to your questions, as well as my reaction/response to your blog post.

In response to your blog post, I would hope that over time, you’ll become less divisive, less “us vs them,” like your statements near the beginning of the post, and become more open moving forward, like your statements near the end of the post. I understand the shock, grief, anger at Hillary losing– trust me, I do. I went through many of those same feelings when Obama took office. I agree, screw Glass Cielings– we don’t need a predecessor in a position to make it clear we can get there, because of course we can! I think it’s important to recognize that, as you said, our nation’s system of elections voted him in. We have to accept that, move forward the best we can, and open those lines of communication. You reaching out and encouraging discussion is an amazing start towards that goal, and for that, I applaud you.

Please feel free to reach out if you want any clarification on the answers I gave– I’m happy to communicate with you and explain anything that wasn’t clear in my answers.

Best of luck, and thank you so much for being open to communicate with those who supported another candidate– it’s what our nation really needs for healing.

Catherine back here. How incredibly fabulous is Jenni? I seriously have a new woman crush. She is someone I can genuinely relate to. And she made some really important points! Would love to hear what you think in the comments. xoxo!!!

Below are links to our collaboration.