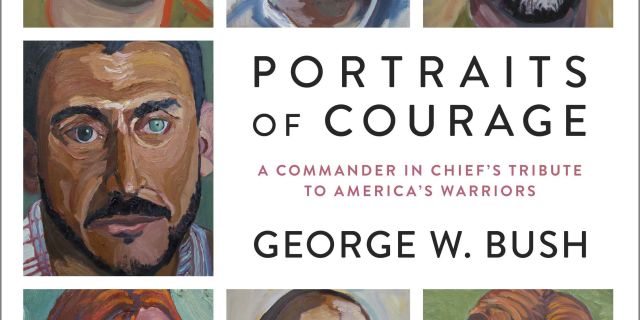 I voted for George W. Bush. Back then, I was a registered Republican, but also I couldn’t stand Al Bore. Yawn!

Per Wikipedia: Bush was both one of the most popular and unpopular presidents in history, having received the highest recorded presidential approval ratings in the wake of the September 11 attacks, as well as one of the lowest approval ratings during the 2008 financial crisis.

He was a fatally flawed president, but I have a newfound respect for him with the release of his best-selling book Portraits of Courage. I highly recommend it.

Bush said he was feeling antsy and trying to determine post-presidency what he could do. He read Winston Churchill’s book Painting as a Pastime, and thought maybe he could take up painting. He turned his mancave into a studio, paints several hours a day, and hired renowned painters to teach him and help him develop. He took up painting only 5 years ago! I love this book because it’s part art, part narrative. Bush is a great artist and writer, plus he painted what he’s passionate about: his profound respect for veterans, their service to our country, and their relentless spirit in the face of depression and post-traumatic stress. All of the profits from his book go toward Bush’s Military Service Initiative which helps veterans make the transition to civilian life.

The biggest takeaways for me are the following:

Here’s Bush on Kimmel discussing the book. Funny and charismatic.