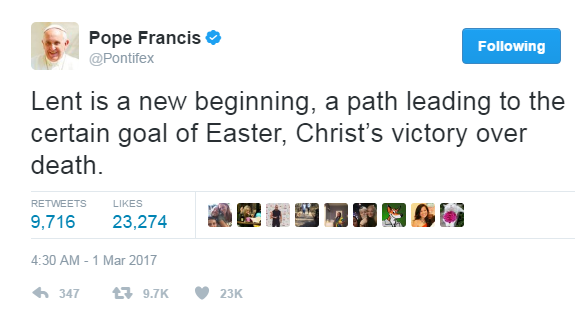 It’s Ash Wednesday, y’all, which is the start of the Catholic Lenten season (40+ days before Easter).

When I hear that people are giving up chocolate or ice-cream, it reminds me of when I was a Catholic school kid wearing a uniform and how I used to give up those things. Totally trivial and elementary.

Now that we are older and more mature, I hope that Catholics understand that the intent of Lent is to work to be the best that we can be, to become Christ-like, and in turn to LOVE more!

Even though I’ve been an actively practicing Catholic my whole life and I’ve gone through numerous Lenten seasons, I have a lot of work to do on this front which is why I pray and arm myself with life coaches and therapists. It ain’t easy!

“Lent is a fitting time for self-denial; we would do well to ask ourselves what we can give up in order to help and enrichothers by our own poverty. Let us not forget that real poverty hurts: no self-denial is real without this dimension of penance. I distrust a charity that costs nothing and does not hurt.” Pope Francis

Instead of asking what to give up, consider how you can be more giving. And remember the three tenets of Lent: prayer, almsgiving, and fasting. I’m giving up anger and resolving to be less negative toward myself and others. Secondarily, I’m also giving up alcohol.

One of my resolutions for the year is to learn about other religions. If you want to know what it means to be Catholic, our faith could be quickly summed up with the Apostle’s Creed:

I believe in God the Father Almighty,
Creator of Heaven and earth;
I believe in Jesus Christ,
His onlySon, our Lord,
He was conceived by the Holy Spirit
and born of the Virgin Mary.
He suffered under Pontius Pilate,
was crucified, died, and was buried.
He descended to the dead.
On the third day He rose again.
He ascended into Heaven
and is seated at the right hand of the Father.
He will come again to judge the living and the dead.
I believe in the Holy Spirit,
the Holy Catholic Church,
the communion of Saints,
theforgiveness of sins,
the resurrection of the body,
and the life everlasting.
Amen.

Resources for you for the Lenten season