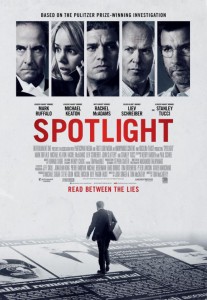 The other night, Dean and I watched Spotlight which is nominated for several Academy Awards including Best Picture.

I’m going to take a different format with this post and interview myself based on questions I’ve been asked in the past and what I think you would want to know.

What did you think of the movie?

It was well done. The acting was superb. Mark Ruffalo is one of my faves. While I wouldn’t rank it in the same league as Slumdog Millionaire, The Artist or Argo (Best Picture Award Winners), I’d like to see Spotlight win as a big Fuck You to the Catholic Church for their wrong doing: the cover up, the lack of leadership, and the continued abuse of children.

Watching from my vantage point as a Catholic, this movie was not a huge eye-opener for me. I am not blind to the scandal. It makes me sick. I want more transparency. I encourage an active dialogue. And I’d also like to see every priest, pastor, bishop, cardinal and the pope acknowledge the enormity of the problem and the steps they are taking to ensure the abuse doesn’t continue to happen.

Up until watching the movie, I believed the reason why the abuse is happening is because in the Catholic faith, priests are celibate. I’ve always thought that was unnatural and wrong. Priests should be able to marry and have families, and because they can’t, they act out their sexual desires on children. The insight I gleaned from the movie is that priests are sexually active mostly with other adults. That was news to me! I can’t verify it, but they do mention that in the movie…which is the same source that determined 6% of priests molest kids. Which means that the Catholic Church has become a haven for pedophiles. The Church has protected these molesters by transferring them from parish to parish despite known abuse. Umm…these priests should have gone to jail! Totally horrible and sickening.

Then why don’t you leave the Church?

I am a Catholic–not a lapsed Catholic, not a Christmas and Easter Catholic, but a Catholic devoted to my religion and the teachings of Jesus. I try, often times I fail, but I try to live my life thinking What Would Jesus Do?

My devotion is not to a priest or those in leadership positions who are human and sinful, but again, to the principles and teachings of God. My devotion is also not to the religion since there are Catholic teachings I disagree with. I think women should be priests. I am pro-choice.

To me, the question of leaving the Catholic faith is akin to asking half the country to move abroad if Donald Trump becomes President. The leadership and the problems of an institution do not define an individual. For the same reason, you wouldn’t just leave your job if your employer wasn’t 100% aligned with your ethics or conscience. You simply deal and take the good and the bad. That isn’t to say that you won’t be vocal about what you disagree with. I’m just saying, you wouldn’t take the next nonstop flight to Reykjavik if our next leader happens to be a racist!

I respect my priests. Some I like better than others. Some give really kick-ass homilies. Others not so much. But would I ever let a priest take Franco to get ice-cream? HELL FUCKING NO.

I think in many religions, including Catholicism, the leaders are revered and considered divine. I don’t believe that at all. We should not put all of our trust in fallible human beings.

What action should be taken as a result of the scandal?

The Catholic Church should be completely transparent and list on a website all known abuse by location, parish and priest.

Every priest needs to get on the pulpit and tell its members that this will never happen under their watch and this is why. A priest will always be accompanied by a nun or female staffer when spending time with children. All priests have passed stringent background checks. I’m throwing out suggestions, but there are numerous things that can be done to protect children. This is not rocket science.

How can you belong to a faith given that abuse seems common place. The Church is sexist, homophobic and generally speaking, plain backwards?!

That is not the faith that I know. I understand this abuse happens. Like I said, I am not ignorant of it. It’s shameful, embarrassing and painful. But I have been blessed to belong to some amazing, wonderful parishes. St. Joseph Basilica in Alameda is the church I grew up in. Newman Hall near the UC Berkeley campus is welcoming. There are too many good parishes in San Francisco to name, but I must call out St. Agnes in the Haight Ashbury neighborhood. I love this church. They are my peeps! Here is the description from their website:

Welcome to St. Agnes Church: inclusive, diverse, Jesuit. St. Agnes draws women and men, young and old, gay and straight. To what some call, the Last Chance Parish. It is truly Catholic as all are welcome!

Do you have any other questions about my thoughts on the movie or Catholicism in general? My favorite discussions have been with friends from other faiths. Do you believe in life after death? So you don’t eat bacon? What would your parents think if you married outside your faith? It has all been so interesting. Thank you to friends who take my questions and for enlightening me on your faith. I really do enjoy learning about other religions.