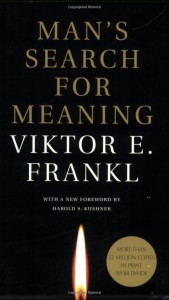 In researching must-read, life-changing books, I kept coming across Viktor Frankl’s Man’s Search for Meaning. I recently finished it and wanted to share my thoughts. It is divided into two parts: Experiences in a Concentration Camp and Logotherapy in a Nutshell. I was very moved by the first part, where he recounts the following:

“We knew that we had nothing to lose except our so ridiculously naked lives. When the showers started to run, we all tried very hard to make fun, both about ourselves and about each other. After all, real water did flow from the sprays!”

If Frankl and others could find meaning when subjected to the most horrible conditions and torture, then damnit, I’ve got a lot to be grateful for. That’s not to say we should discount our own feelings or miserableness because others have it worse, but there are reasons for continuing.

Frankl would sometimes ask his depressed patients, “Why do you not commit suicide?” Their responses (love for a child, a working talent, a positive memory) helped form the groundwork for his therapy. Frankl, whose mother, father, brother and wife died in concentration camps, says he survived the Holocaust partly by recalling images of his wife and also by dreaming of one day teaching the lessons he learned from his time in Auschwitz.

For me, the most important points Frankl made in the first half of the book were the following:

The latter half of the book was harder for me to digest because it’s very psychoanalytical and psychology is not an interest of mine. Frankl promoted his own theory of logotherapy (the Greek word logos denotes meaning) which in his words, “Logotherapy focuses rather on the future, that is to say, on the meanings to be fulfilled by the patient in his future. At the same time, logotherapy defocuses all the vicious-circle formations and feedback mechanisms which play such a great role in the development of neuroses. Thus, the typical self-centeredness of the neurotic is broken up instead of being continually fostered and reinforced. To be sure, this kind of statement is an oversimplification; yet in logotherapy the patient is actually confronted with and reoriented toward the meaning of his life. And to make him aware of this meaning can contribute much to his ability to overcome his neurosis.”

I took away many lessons from this book. I realize that despite suffering there is fresh air, birds are singing, that reliving happy memories can alleviate present pain. I know that there is always something to live for, that Frankl found humor and culture in spite of horrifying circumstances. I realize that we are not our circumstances, but how we deal with those circumstances shape our future.