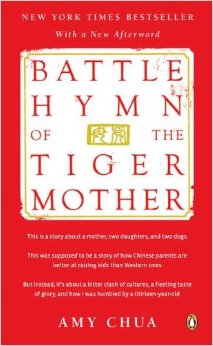 I finished listening to Amy Chua narrate her own book Battle Hymn of the Tiger Mother and really enjoyed it. The book came out in 2011 and ignited a controversial debate on parenting in the U.S.

First, you can’t argue with the results. Amy Chua and her sisters are Ivy-League educated with law degrees or PhDs. Amy Chua’s daughters, as a result of her unrelenting tiger parenting, are musical prodigies currently attending Harvard. So yeah, it works alright.

I come from a similar parenting background. My mom expected all A’s. We obliged, because if we didn’t, we got pummeled. That’s the sticking point of tiger parenting for me. Children will live up to our expectations of them. If we have low or even no expectations, then hell, let’s cross our fingers that they turn out ok. If we have high expectations, then we can be assured their cooperation. As parents, we are trying to nurture our children’s talents.

“Chinese parents can order their kids to get straight As. Western parents can only ask their kids to try their best.” Amy Chua goes on to describe the variance by saying that Western parents are too concerned with their kids’ self-esteem and are constantly trying to reassure them despite mediocre performance. Chinese parents, in contrast, demand perfection and if not achieved, believe it’s because of a lack of hard work.

I agree that the majority of American parents do not expect excellence. It seems that their job is only to raise healthy, happy children with no regard for their high level of potential.

One of the tenets of tiger parenting is ingraining in children the value of hard work. For most Western kids, hard work means completing homework or kicking a ball around for 30 minutes a day (if that). For tiger-parented children, hard work means doing all the extra credit assignments and practicing the piano for several hours a day, every day, even on holidays. The philosophy is that the longer kids practice, the better they will get, and the better they get, the more confident they are in themselves and in their abilities.

It all makes sense. I am a product of tiger parenting and according to all my teachers, a model student. People were constantly asking my mom what her secret was.

While the results speak for themselves, I do have a counterpoint to tiger parenting which is that if I survey the most successful people I know, the majority of them did not have tiger mothers! As an example, Amy Chua’s husband (who she met at Harvard Law) was raised by a very liberal, hippy mother and he is a renowned law professor and best-selling novelist.

I was making this distinction to a very successful friend of mine who retorted, “But I wish I’d had a tiger mother. If I did, maybe I would have been even more achievement-oriented. I certainly wouldn’t be the procrastinaor that I am today.”

Personally, I’d like to be a tiger mother, but I don’t think I have the energy. Unlike Amy Chua or my mother, I don’t have the fight in me to make Franco practice an instrument until a song is perfect. I am too old to argue with my husband who was raised in the Western style or with Franco’s friends who probably won’t be held to high standards. We shall see, but this parenting model is surely an uphill battle these days. I mean, after the book was written, people asked that social services step in and take Amy Chua’s daughters away from the abusive household. Crazy Americans!

What is your assessment of how you were raised, and how does that translate into raising your own children?