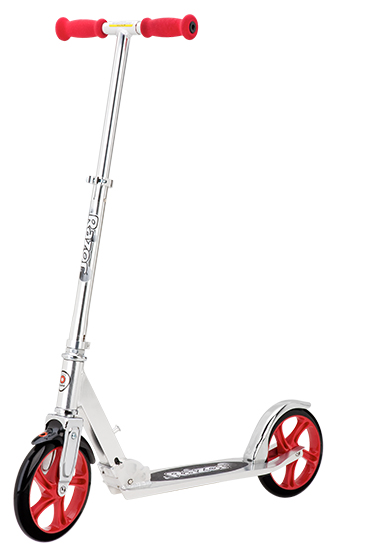 Considering I gave birth drug-free and have run races (including marathons) on a whim with little to no training, comparatively-speaking, I have a pretty high pain threshold. So when I say I’m in pain, I’m genuinely, tragically in a lot of pain.

As a working mom with zero work from home privileges, I’m a sucker for shortcuts and timesavers, which is why most of the books I ‘read’ are actually read to me. I can commute/walk and ‘read’ at the same time, which is totally awesome.

On my commute, I’ve seen people zipping by in scooters and I got the zany idea that I could do the same. It would essentially shave 10-15 minutes off my commute! A no brainer, right?

The problem is that I can be sort of a klutz, coupled with the fact that I have atrocious hand-eye coordination. The first day I brought my nephew’s Razor to work, I confidently zoomed half-a-block before I hit a groove in the Financial District and launched my 90 pound frame into the air. I instinctively threw my hands in front of me to cushion my fall and ended up spraining my left hand and deeply skinning the knuckles of my right hand. You know how cartoon characters have stars circling their heads whenever they crash? That’s exactly how I felt. I swear to God my vision twinkled over with stars. I sat on the pavement, stunned, scraped, bleeding…pretty much incapacitated for a few minutes.

Ever since, I’ve been trying to give myself some TLC and also nursing a bruised ego. I am not a kid anymore. I am freaking 40 years old. Walking is good. Anything beyond that is off-limits!