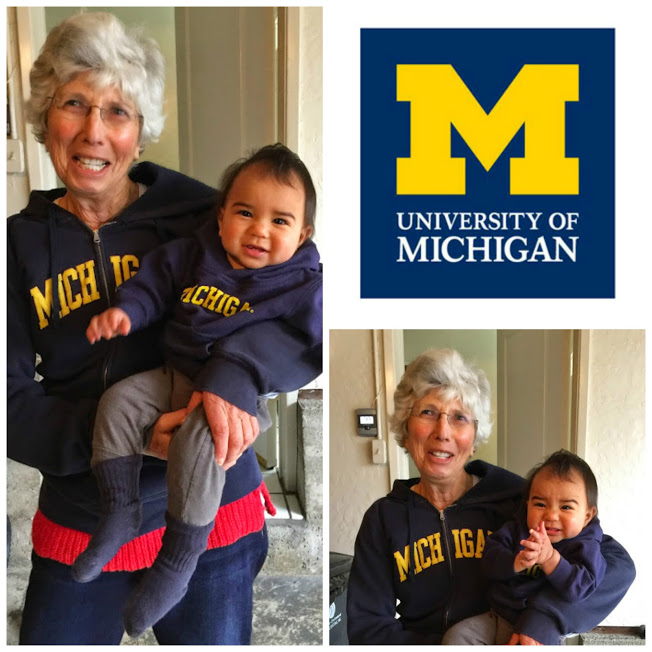 Our nanny is a Michigan alum and is already indoctrinating Franco in the Wolverine way. It makes my heart swell to look at these pictures because Michigan is a great school. I’d be so proud if Franco went to Michigan or Cal or Stanford, but that is his decision to make and not mine. What parent wouldn’t want their child to be educated and graduate from college?

While I am a fervent believer in education, I also do not think college is for everyone, especially now when the expense does not often justify the result!

I tweeted the following last week and it generated such debate that I wanted to bring the discussion here into my blog, given that education is an important topic that I cover.

Here are my personal thoughts:

College is one of the most important investment decisions a student will make. If, as my Tweet indicates, one-third of college grads do not think college prepared them for employment, then what a waste of money! College is not about attending football games or getting trashed at a fraternity party. Sure that is part of the overall experience, but the only reason someone should go to college is to be a gainfully employed citizen once they finish. If not, why go?!

I am concerned that too many high school students are told that they have to go to college. That it’s simply the way it has to be. I laugh when I hear about all these parents who are shepherding their kids through the college application process. I’m sorry, but if your kid cannot fill out these applications on their own, then they should be repeating high school!

College is the status quo and if you want to break out of the cycle (i.e., 9-5 job, 2 weeks vacation), then you obviously have to take risks and do something different for God’s sake!

Oh but Catherine, you’re screaming right now, that’s exactly what you did. Exactimundo. The “status quo” was the right path for me because I love the corporate life. Coming into work every day, in my cubicle office, to stare at a monitor for hours on end makes me happy. I am doing exactly what I set out to do.

I believe college is worth it if you can get into a top school. Highly-ranked schools are competitive, where you will be in class with peers who are driven and motivated. They have massive alumni networks which you can use to your advantage for internships and your career post-graduation. They recruit the best talent in teaching and students, and that is where the donations flow.

Paying the price of private college education at a low-ranked school is akin to flushing money down the toilet. Sure there are exceptions. Scholarships, financial aid, etc., but I question the value of going to Generic University when your chances of employment are equivalent to or even less than going to a state school.

The college system as we know it is unsustainable. This is a new age where there are many different paths to take, and children shouldn’t feel forced into college and saddled with debt. These days, why not go straight to a paycheck? What high-growth startup wouldn’t want to hire an eager high school grad with a high SAT score?! No college diploma necessary!

I compiled all of the comments from my Facebook feed into the first comment below. Great points and worth a read.

Excited to get other opinions. Please feel free to comment.