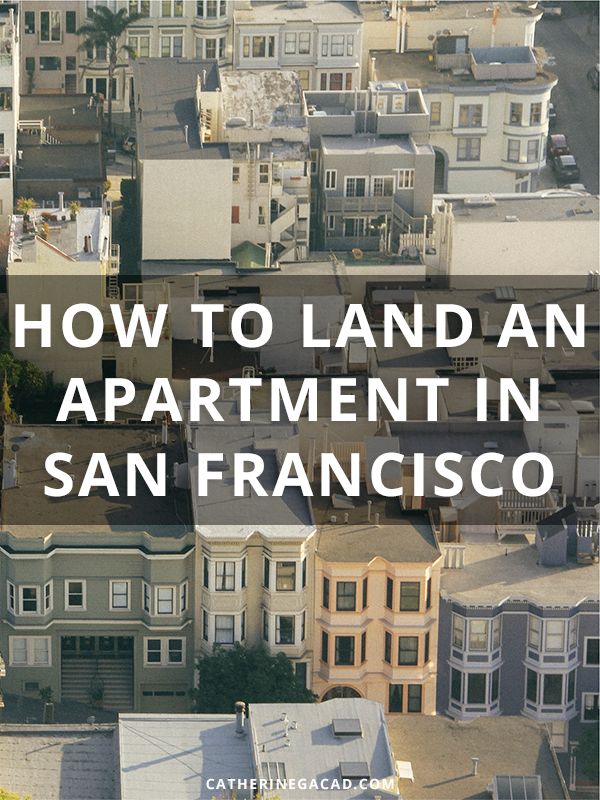 In the dog-eat-dog world of San Francisco, it’s not about finding an apartment (if you can afford the rent), but whether you can convince the landlord to pick you out of a stack of rental applications that read like Silicon Valley resumes.

As landlords, Dean and I found ourselves in the unenviable position of playing with housing destiny as our rental unit has recently become available. There were four very interested couples that were each so amazing that after every interaction, I told myself, “Yes they’re the one!”

We were so torn that Dean and I ended up rank-ordering each couple on our own, handed our list to the other, and laughed because our top pick was the same–whereas the other couples ranked differently on our lists. Dean said he felt like we were on a reality TV show. I agree, it was very Bachelor-like.

Now that we’ve gone through this and seen some incredible people, I know what it takes to be the top candidate on any list.

In this ultra-competitive market, let me tell you how to land an apartment in San Francisco.

One couple nailed it with their preparation. They had a packet with their smiling faces on front including a brief summary. That summary included their places of employment and in parentheses their annual salaries. BAM! I know right away their names, where they work, and how much they make. Music to a landlord’s ears. In the packet, they had credit reports, offer letters, and a landlord recommendation. Hello! No need to fill out an application. They had every detail I wanted and more.

Do this. Put together a rental package and include W2s. Staple your business cards to the package.

While everyone else was wasting their time filling out an application, we had more time to chit-chat. Serial podcast? Bring it! You love wine? So do I! I LOVE YOU GUYS!

Securing an apartment is akin to rushing the Greek System. You have to connect with the people in the fraternity/sorority otherwise you’re toast. Don’t just fill out an application, then leave. First ask smart questions about the apartment. Then talk interests. “The backyard is perfect because I can see myself out there barbecuing and drinking a glass of wine.”

This is the area where Dean and I struggled with the most because we had a connection with every couple. I especially liked one couple. She was from Beijing and he was from Shanghai, and the two of them debating the merits of each city (when I asked, “If I was going to China for the first time and I could only pick one city, which should I choose?”) had me cracking up. By the way, I’ve traveled to Shanghai and loved it, except for the fact that I got tea-scammed. Haha! They had a hoot over my story.

Be aggressive. Be be aggressive. And here, my friends, is why one couple landed at the top of both of our lists. Granted the texting and phone calls were a bit much at first; in the end, their genuine love of the place and willingness to commit could not be beat. When someone says they’re coming over with a check, I mean, you can’t turn that down! Kudos to them. We’re happy for them, but we would have been lucky to have any of these couples as our neighbors.

This whole process made me realize…well actually, I already knew this, but the process only validated the fact that there are really cool people living in San Francisco. Cool enough that after a 20 minute conversation, you want them to come over for BBQ and wine. This city and its inhabitants are the best ever!

Now go forth and find your happy place!