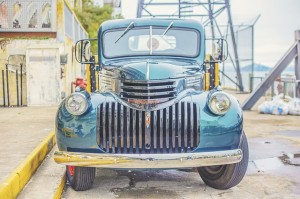 We got into a car accident on Sunday. As bad of an Asian driver that I am, I was not the one who caused it. A Subaru Forester slammed into a brand new Prius which then hit our Nissan Pathfinder. A 3-car crash. Highway patrol was immediately on the scene, followed by a police officer five minutes later.

The woman who caused the accident looked to be in her 60s and must have had slow reflexes in responding to the traffic. The driver of the Prius was pretty shaken up. Her car had the most damage. Luckily no injuries. Our car had the least amount of damage. We’ll probably need to have our bumper replaced, but that’s it.

Poor baby Franco screamed after we were hit so after the police officer took our statement, we brought Franco to the pediatric ER where they took his vitals and examined him. All clear.

I’ve been making phone calls to insurance, giving recorded statements, searching for a new car seat to buy, and scheduling an appointment to have our car checked out. It’s been a pain.

During this process, I’ve come to the conclusion that All State insurance is one of the best. I don’t have them; I’ve got Geico. Within 24 hours All State (which insured the Prius) had contacted and gotten statements from everyone involved. If I have any questions about anything, I’ll be calling All State and not my own insurance. All State rocks! They are totally on top of things. I might have to make the switch.

Also I’m now a believer in buying a big ass car if you have kids. Before the baby, we used to drive a tiny Honda Civic. That piece of tin foil disguised as a car would not have survived this accident.

Have any of you been in a car accident that caused you to change your insurance provider or car?