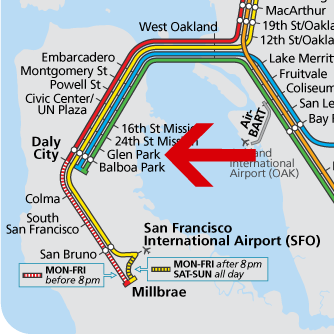 This past weekend, we went from renting a 1-bedroom apartment in Lower Nob Hill to homeowners of a duplex in Glen Park. Yes, Glen Park is still in the city of San Francisco! How people can live in the Bay Area and not know where Glen Park is baffles me since Glen Park is a stop on the BART train line. That same train most people take to go to the San Francisco International (SFO) airport. Cmon people! I get these dazed and confused looks whenever I mention my new neighborhood, which I can understand from people who aren’t from here. But locals should be ashamed.

We had been on the hunt for a home for almost a year. Went to an open house and less than four weeks later, we were moving into our new home. Is that record time or what?

Saturday was our move day. Gain a home, lose a car. That’s right. The morning of our move, we discovered our car had been stolen from the safety of our parking lot in Nob Hill. I should add that our parking lot is manned by valets from early morning until late at night, so someone decided to take it on a joy ride in the wee hours. The police officer who filed my report and my insurance both said that 95-99% of the time, the car turns up within a week.

In buying this property, we’ve also become landlords. The rainbow after a grueling weekend came in the form of a lovely couple who we’ve selected to be our neighbors. They, too, are expecting a baby which is awesome. My little one will have a built-in playmate. We are thrilled.

Now…just waiting for my car to turn up.