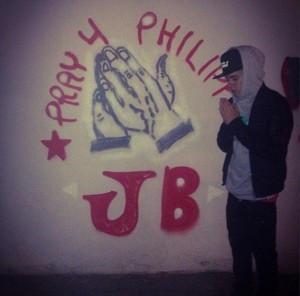 I don’t know much about Justin Bieber except that he’s a pop star, but I can honestly say I love him.

After the destruction of Typhoon Haiyan on the Philippines, Bieber began to raise money for the cause by tweeting this. He auctioned off the spray paint and signed copies of the picture.

Soon after Bieber launched a massive fund-raising campaign and rallied close to 50 million Twitter followers to donate. He ended his Believe Tour in the typhoon’s worst hit town Tacloban.