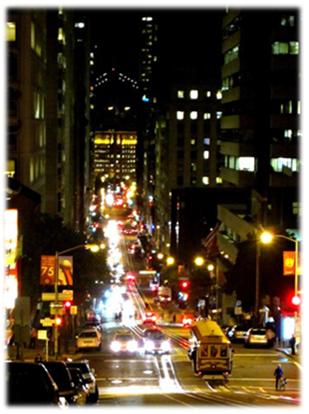 The3six5 was an online collaborative project nominated for a Webby Award in 2011. It captured a daily perspective of 365 individuals from all around the world beginning January 1, 2010 and ending December 31, 2012. I was proud to be selected as a participant in the3six5 and enjoyed writing my piece which is no longer archived on their currently defunct site (hosting can be so expensive!). So here ‘tis on my own site for the first time.

Catherine Gacad works with numbers, but thinks in words. She opines on current events and life’s adventures on her blog.

If the calendar were a roller coaster and we were the passengers, we’d be coasting toward the New Year—the scary free fall behind us. The ghosts of Halloween past, Hurricane Sandy and Mitt Romney, have vanished and the specter of the presidential election has been eclipsed by renewed, albeit subdued hope for the future.

It’s a beautiful Fall night, the kind of night that feels like anywhere else during the summer time.  The sky is deep navy and the air smells clean.

My commute involves a grid of buses and cable cars which are just like roller coasters (expensive and prone to mechanical failure) but native to the Golden Gate. I retrieve my Muni pass and hand it over. The hand-held scanner flashes a green square which coincides with a pleasant ‘ding.’

After a mechanical jolt to release the breaks, we are careening down Powell Street, arms tightly wrapped around the outdoor poles, the wind shocking life into our faces. Wwweeee!!! I adore the tourists with all their varying accents, happy to be on vacation; they put me in a holiday mood all year round.

A block away from our apartment, the resident derelict stands on the corner, asking for spare change. His face is raw and red. He has probably been chasing the sun to soak up its warmth. I think of Tony Bennett singing at the Giants World Series Parade. “When I come home to you, San Francisco, your golden sun will shine for me.”

I skip every other step while racing up to the front door of my apartment building. I twist the key and shove myself against the door to enter. The tourists, the homeless, the twinkle of the night, I leave behind.