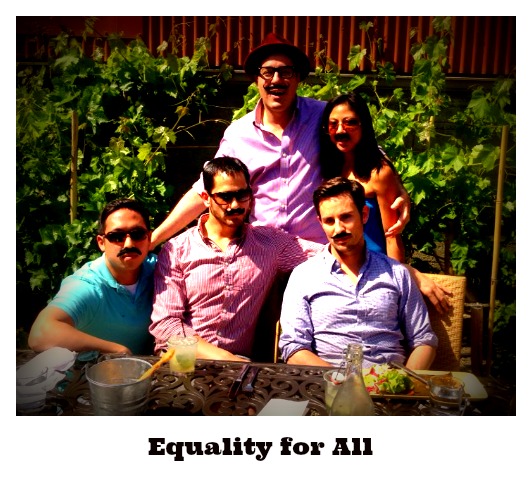 A year ago, Dean and I were in Healdsburg with our gay friends donning mustaches to celebrate Mexican independence on Cinco de Mayo. I wish we were all together last night so that we could celebrate the Supreme Court’s twin rulings paving the way for equal rights for everyone regardless of sexual orientation. The highest court struck down the Defense of Marriage Act which had denied the recognition of and federal benefits for same sex couples who were legally married. Further and closer to home, the Supreme Court found California’s Proposition 8, which banned same sex marriage, to be unconstitutional.

I really cannot understand why we have to fight over this. People should be able to love whoever they want to love. At one point in time, interracial marriages were illegal. Doesn’t that seem so outlandish right now? Hopefully years from now we will look back at this time with the same disbelief.

While I respect everyone’s right to their own opinion, I do not understand conservatives who insist that marriage is supposed to be between a man and a woman, as stated in the Bible. Let’s not confuse the letter of the law with the spirit of Christian principles. Love is love!