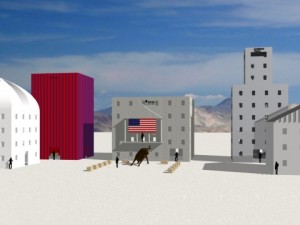 One of the big installations at Burning Man this year was called Burn Wall Street. In keeping with the backlash propagated by the Occupy Wall Street movement, the art project on-playa culminated in the fiery demolition of Goldman Sucks, The Bank of UnAmerica, Merrily Lynched, and Chaos Manhattan. Clever eh?

As a Burner, I’ve often felt remiss as someone who works at, not only a corporation, but in the financial services industry. I am considered evil while liberal, poorly paid hippies are praised. It’s as if extreme success (specifically well-paid accomplishment) deserves its own scarlet letter. Burners consider themselves free and open-minded, but once they smell a religious, Republican rat, they become quite the unwelcoming lot.

I’m tired of the resentment and here to prove the naysayers wrong. While corporations aren’t flawless, I wholeheartedly believe they are the backbone behind economic and civic sustainability. Who are one of the first to give when communities are suffering? Corporations! Not only corporations, but banks. The same banks that Burn Wall Street wants to eliminate. I listened to an interview today on how JPMorgan committed $5 million almost immediately to the cause.

So many corporations have contributed. You can see an updated list here: http://bclc.uschamber.com/site-page/hurricane-sandy-corporate-aid-tracker.

Burn Wall Street and Occupy Wall Street, do you plan on torching these donations as well?