Muffled screams wafted through the windows and curtains into our bedroom so early in the morning, I tried to pretend they were part of my dream. Is a playoff game on this early, I thought, peering momentarily from under the covers. It sounded like I’d been transported to North Beach during the World Cup. The intermittent echo was more a rallying cry, than crackhead call; more a chant, than car alarm—noises typical of the Tendernob. Becoming increasingly annoyed with the disturbance, I sought to pinpoint the source. Maybe a warning shout, “SHUT THE FUCK UP OR I’LL CALL THE POLICE,” would allow me another couple hours of sleep. Then I realized who the troublemakers were.

Many years ago (so many I cannot recollect the year), I ran that race. Ran it when I was 15 pounds heavier than I am right now, when I was so obsessed with running I hated it and myself, like a true addict. I laugh now just thinking about it, having chosen a sport most aligned for an introvert. I ran to lose weight. I ran because I thought it would make me feel good, but I only ended up feeling spent and old. I ran to escape. I ran because that’s what active San Franciscans do!

The Nike Women’s Marathon was like any other race I ran. I ran them all, rain or shine, flat or hilly, in good times and in bad. But the one I ran years ago was different because I was sick. I could have easily skipped it, as I’m sure I had another race planned in my near future, but I couldn’t get the prized Tiffany’s necklace out of my head. Must cross finish line. Must get brand name jewelry.

Like the running revelers this morning, I made my way to Union Square and huddled with the masses. The sun was doing what I myself should have been doing that morning: sleeping. A cold drizzle permanently saturated my face as I ran. No excuses. Just do it.

I didn’t finish the marathon. Instead I crossed the half marathon point and decided that would be the end of the road for me. Past the finish line were young dapper men dressed in tuxedos. With gloved hands, they held silver trays, balancing piles of blue Tiffany’s boxes. I was proud of myself for how far I’d run on empty. I headed home on bus, medal around my neck, hands grasped around a blue box of treasure. I smirked when I saw what was inside. Ahh, you running gods. I ran a half marathon and all I got was this cheap necklace. 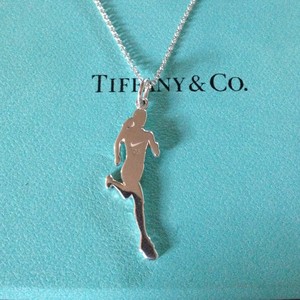