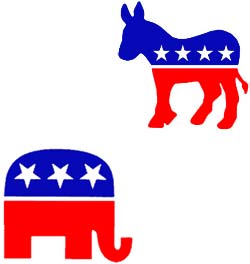 I’m neither a donkey or an elephant. Am I a Libertarian, like the business school population? Or a democrat like my parents? Or formerly registered as such, am I a Republican? I don’t think my alliances give any clarification: campaigning for Hillary Clinton, rooting for McCain, and voting for Obama.

I’ve said recently that I cannot vote for a pro-life ticket, but I started thinking about how confused I really am. In the past and if I weren’t so perplexed, I’d vote for anyone who was anti-abortion if I liked them as a person and overall could stomach what they stood for. This campaign is making everything out to be so black and white that I feel like I need to pick a side. You’re either a conservative Republican or a liberal Democrat which is why I thought I could distance myself from the Republican ticket because of their stance on abortion. Yet I’m neither a donkey or an elephant. Maybe I’m a hybrid “keyphant.”

I am back to the drawing board and really wanting to take a step back, dismiss the stereotypes and biases, and make an informed choice about who to cast my vote for.

I love Obama. I have nothing but the deepest respect for his intelligence and ethics. But even if he gets re-elected, nothing is going to substantially change because he will spend the next four years fighting the Republicans. That is the shameful truth. He is not to blame for our country’s problems. If you think this is an Obama problem, take a look at a map and name another country that is prospering during this GLOBAL recession. It’s not Obama’s fault. If it is, then the blame needs to be shared with all the worldwide leaders. My point is, stop pointing your finger at Obama.

I need to better acquaint myself with Mitt Romney who overall, I believe, is a good guy. When I say good guy, I apply my never-fail-morality-gauge: are you going to catch this guy with his pants down at a gay nightclub? Certainly not.