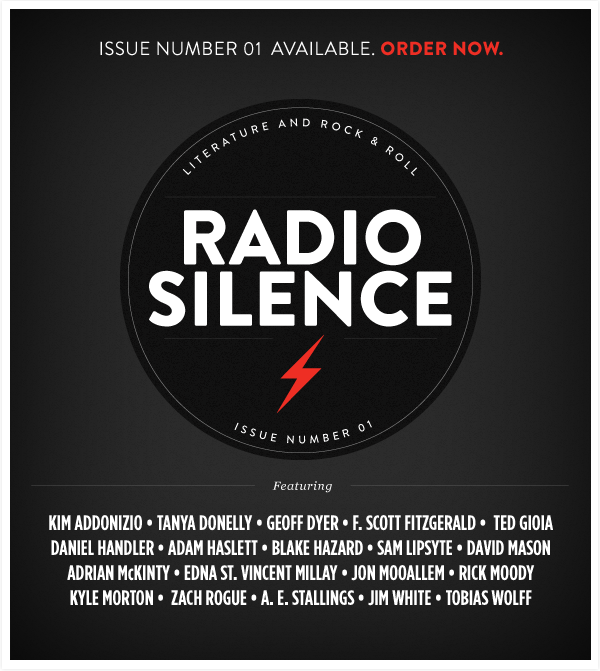 No news on the pregnancy front, but something almost as good. I discovered a new creation, the birth if you will, of Radio Silence magazine. I’m not sure how I heard about it, maybe because I’m looped into the SF writing collective, the Grotto. I honestly don’t know, maybe it was through a tweet. Point is, I happened upon something unbelievably grand.

The concept sounded cool: a new magazine about literature and rock & roll. I’m not a rocker; I hate rock. I’m not even musically-inclined except that I have a deep appreciation for classical music. My favorite radio station is BMIR (Burning Man Information Radio) which you can tune into on the playa, but even better online all the time at BMIR.org. Another sweetener, they started broadcasting live from the desert about 10 days ago which you can hear every Thursday starting at 6pm. The reason I like BMIR is because you won’t hear a more diverse selection of music anywhere. Diversity is good.

Fuck rock & roll, I say, what I’m most fanatical about is literature. Good solid writing. We’ve all tried to pickup the Economist, having heard that it’s a prestigious magazine. Boring! I don’t know a single person who reads it. I’ve tried to read several literary magazines (I won’t mention them here so as not to offend the editors), but they stink too. You find yourself picking and choosing different articles to read. A few are good, but most are bad. God, why did I buy this crap. Until now.

Sure, I figured I could cough up $25 for a year subscription of two issues. Would be nice to have the first of something. I was also drawn by F. Scott Fitzgerald’s name. He is, my main man. There’s a first edition Great Gatsby at Green Apple bookstore that I’ve had my eye on for a while. The magazine includes an article by Fitzgerald, then follows it with a piece by Fitzgerald’s great-granddaughter. Ok, now I really must have this magazine in my possession pronto.

Issue #1 arrived yesterday. On first glance, it looks like most literary journals: bound, clear font, with graphics using a palette of red, white, and black. I dug into at night. The writing is catchy, absorbing, and incredible. You forget how beautiful literature can be, until you happen upon it again. What a delight.

People, I am in love. Yes, truly in love with this magazine. Again, this is coming from someone who pays no heed to the music scene.