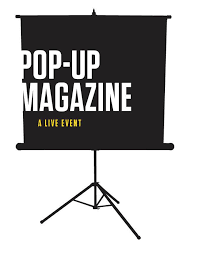 Long overdue review of Pop-Up Magazine’s Issue 5 which took place at the SF Symphony Hall on Wednesday November 9th. Gathered a group of friends to meet up for drinks at Jardiniere beforehand, go to the show, and continue drinking afterwards at the Boxing Room.

Pop-Up Magazine has been going strong since its first issue April 22, 2009. It’s a unique, only-in-San Francisco magazine that’s performed live on-stage. The venue has progressed from the Brava Theater to the Herbst Theater now to the Symphony, which goes to show its escalating popularity. This was my first time. I jumped on buying as many tickets as possible as soon as they went on sale. I think the event sold out within an hour.

The show is structured like a typical magazine with specific feature topics like foreign affairs, food, music, crime, travel, and so on. Extra originality points for the crossword puzzle. A woman read her energized poem about the city of Oakland while a crossword puzzle projected behind her gradually filled in with key words. Other highlights included a piece titled Mr. Mom with the writer testing what it was like to be a pregnant man and capturing people’s reactions on camera, and also the video history of a famous pop song in Pakistan. There were a lot more lowlights, but that happens in all magazines. Who really reads every article? Plus, the audience could have used a bathroom break.

Nevertheless, props to the Pop-Up Magazine editorial crew for launching a fab issue. Looking forward to #6.