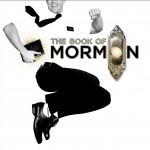 Everyone has been raving about the musical Book of Mormon. I haven’t read any reviews, but winning the Tony for Best Musical should silence any criticism. Keith got us tickets for a Saturday night show. I tried not to get my hopes up; when something is overly-hyped, I tend to be disappointed. I wasn’t. I thought it was hilarious! I was laughing out loud constantly.

But was it the best musical ever? Umm, no. I think Memphis, last year’s Tony winner for Best Musical, had better music and dancing, and was better overall. Kudos to the South Park team for expanding beyond TV and bringing their talent to Broadway. I’m sure there are more great things to come and I’m looking forward to the next musical!

I also thought they did a great job of exposing religion’s faults (following the letter of the law), but also highlighting what’s beautiful about religion (helping your community).