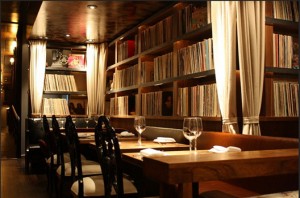 Alrighty, I’m posting a Yelp review because I write so few of them these days. Cmon, people, am I ready to be a food critic or what? Not a food critic yet, but a nightlife critic possibly?

Looks like the Tenderloin is the new Mission because hipsters are crowding around and forming lines outside Farm:Table, Jones, and the Shooting Gallery. Bored of the same consistently-good restaurants–Bar Jules, Mission Beach Café, and La Mar–I can finally ecstatically recommend a newcomer to the Tenderloin scene. In the aptly-named Phoenix Hotel, the adjacent lounge has re-incarnated itself from Backflip to Bambuddha and now to Chambers. It is sick, or slick, or whatever the lingo is today. It’s like entering Bourbon and Branch’s library, but better. Like the Ace Hotel, but even better. You can actually see your date as the lighting, a refreshing golden hue, has been strategically placed. Even the food is worth the guarded walk from your locked car to the entrance. As for the impeccable food, the PBLT, pork belly lettuce and tomatoes, is stand-out. A big coup for the neighborhood, this new hot spot won’t be reinventing itself for quite a while.