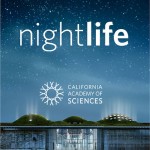 I became a member of the California Academy of Sciences in San Francisco well before opening day on September 27, 2008. Before last night, I’d gone less than three times. That’s right—maybe thrice in three years. The first time, on a Sunday soon after opening, there were screaming children everywhere and baby carriages careening in every which direction. Every time since then has been the same maxed out environment. I consider the membership my financial contribution to the sciences and one of my local museums.

I’ve been wanting to go to one of the weekly Nightlife events for people 21 and over, but it never worked with my schedule. By the way, whoever thought of the Nightlife concept is a marketing / public relations god.

The one last night was sponsored by the SF Marathon and since we’re going to do the 5K on Sunday, I thought this was the perfect opportunity to finally check it out.

What fun! There were physical therapists, trainers, and nutritionists on-hand doling out advice. Masseuses were giving massages. There were bars setup on every floor. One of the bars on the main floor was cooking up pulled pork sandwiches. The DJ was rocking it. There was a photobooth. The most unbelievable thing to me were all the older docents, volunteering their time until 10pm. We touched starfish, abalone, and an albino corn snake. We saw the albino python and of course, the albino alligator.

But the best part was the program in the piazza. There were lively performances by Cheer SF followed by a costume contest for best track suit, most outrageous running pants, and brightest neon. H-I-L-A-R-I-O-U-S. It was comedy hour. I felt like I should’ve paid more for that. I told Dean I was going to try out for Cheer SF. They were so fun and funny.