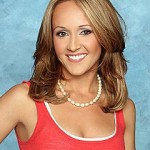 Let’s take a break from Canada to talk about trashy American reality TV. This season’s Bachelorette is Ashley Hebert. On one of the most recent issues of People magazine is a bikini-clad Ashley with the cover title Tortured for Her Looks. The poor girl has taken a verbal beating from a crop of her suitors who think she’s not attractive. In her place, they would have wanted blonde Emily who is definitely pretty, but would have been the most boring Bachelorette ever. Is that all guys care about? Blonde, dumb, doe-eyed beauties?

Ashley is an Ivy League-educated dentist who makes more money than most of the suitors on her show. People, brains = beauty! She’s smart, spunky, athletic, what’s not to love? So fashionable and cute.

Although Ashley’s obviously bright, she made herself look like an emotional ditz early on, which goes to show that even smart people do dumb things when they’re blinded by lust. I’ve moved past her insecurities and can firmly say I’m Team Ashley. I hope she finds her prince. I think she’s a genuine catch.