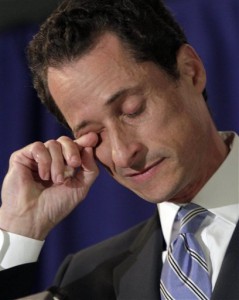 During my blogging tenure, I have bashed Republicans–the homophobes who preach conservative family values then get caught with their pants down at their local rainbow flag-waving hot spot. So I very well couldn’t let today’s NY Times headline go unnoticed: Weiner admits he sent lewd picture; won’t quit.

I don’t know much about this guy; he’s one representative out of how many hundreds in the House? But I will say, his last name sure is a hoot. Here’s a picture of my weiner. Signed, Mr. Weiner. Gawd, it doesn’t get any more God-awful than that. I don’t watch TV, but I can only imagine the jibes he’s been getting.

Again, I don’t know much about the guy so I was thinking, goodness, leave the single man alone until I read that he’s married. Of course. It’s always those married guys!

Take a look at this picture. He’s wiping his eyes as if he’s remorseful. His eyes are d-r-y. As in stick-straight, flat-ironed, blow dry. That playboy couldn’t squeeze a tear out even if he were paid to. Please tell me the man doesn’t have kids!