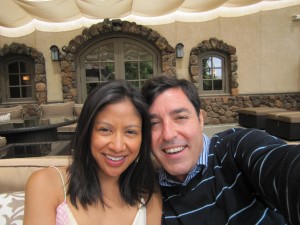 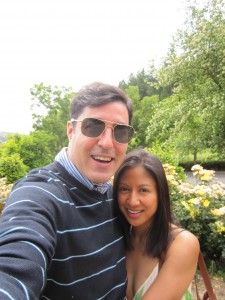 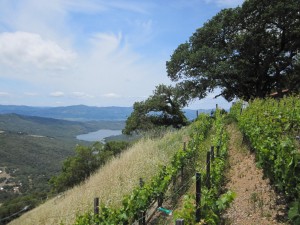 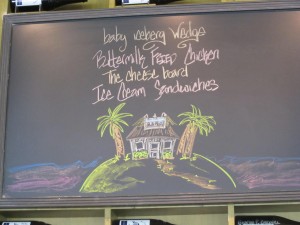 I dream of YFC – Yountville Fried Chicken, Ad Hoc’s famed fried chicken cooked every other Monday and booked several months out. A coworker of mine has taken at least two half-day Mondays off work to head north in advance of horrific I80 traffic. I’m not one to take time off for a special meal in a location I frequent often, at a restaurant I’ve already eaten at three times, but the Memorial Day holiday beckoned with no travel plans except for local jaunts. Time for YFC! Like I mentioned, Ad Hoc was completely booked when I called, but the hostess offered 10 open seats at the bar. I quipped with an eagerness so not appropriate for a cubicle environment, “Oh yey! We’ll see you Monday at 5!”

Everything else I planned for our Memorial Day wine country excursion was secondary. First, a shocking $40 reserve tasting at Pine Ridge. The wines were so smooth and silky, but at $40 a tasting, I kinda expect that. Next up, and I mean way up as in a two mile rugged ascent past the security-coded main gate was Kuleto. The owner is the restauranteur who started McCormick and Kuletos, and apparently owns Boulevard, Waterbar, Epic Roasthouse, Jardiniere, Nick’s Cove, among others. The tasting fee was $35, still pricey, but includes a tour of the grounds including bunny rabbies and cheese pairings. Well worth the view atop Napa Valley. Lastly, we popped into Hopper Creek in downtown Yountville and discovered a lively frat-house environment complete with the Giants game on TV, a life-sized Elvis, and charismatic Marcus pouring wine from behind the bar. So refreshingly different. Yey for Hopper!

We were having such a blast, we didn’t get to Ad Hoc until 4:50pm and I almost shit a brick when I saw the line wrapped around toward the parking lot. Dean comforted, “We can always go somewhere else.”

“NO!” I screamed. “This is why we came. I am not leaving here until we get fried chicken, I don’t care if we have to wait.” At 5pm, they started letting people into the restaurant and we noticed several groups had reservations. Not sure why you were waiting in line if you already have a reservation, but whatever.

When we got to the hostess table, she smiled, “Two last seats over there at the bar.”

5 stars for the fried-to-perfection chicken that had been specially brined for several days. Step aside Wayfare Tavern, your overpriced chicken nuggets don’t even compare. Ad Hoc’s accompanying velvety mashed potatoes and fresh crunchy greens were just as good. But the rest of the menu, not so much. The cheese plate, kind of a waste. The ice-cream sandwich, that was pathetic. Still, I would highly recommend lining up early on the next Monday holiday (you have to check to make sure it’s a Monday they’re serving fried chicken) and getting in on some of that tasty YFC action.