In-between sips of wine overlooking the Tuscan hillside, I have to weigh in on that royal wedding dress. I’ve read that it’s been viewed very favorably by most fashionistas which makes me wonder…why?!

If your wedding dress made in the year 2011 is almost an exact replica of a Grace Kelly dress from more than half a century ago, then you shoulda just got the damn thing from a high-end vintage store versus spending hundreds of thousands of dollars and months of labor on one of the most important wedding dresses of all time.

And also, why in the hell would you choose the fashion house of Alexander McQueen who is known for being edgy, over-the-top and extremely contemporary to make your dress that could’ve been made by showing a bunch of Filipino seamstresses Grace Kelly’s dress?

Gag! I was so disappointed. For one, Kate chose to be so classic that she copied a previous style. Two, that she misaligned the style she wanted with the designer she eventually picked. Three, the dress made her look like she was 39 years old and not 29 years old. Anyone with me on that?

All in all, she looked fine, but I think she could have looked so much better and dressed it up with a modern style. Here’s a sketch I found from a website that gave some potential royal dress options. How gorgeous would this have been–the dress on the right. Still covered up but sexy, with a long train, and rosettes and lace that actually show! Everyone was talking about all that lace on the bottom half of her dress and I couldn’t see that intricacy! What a waste! 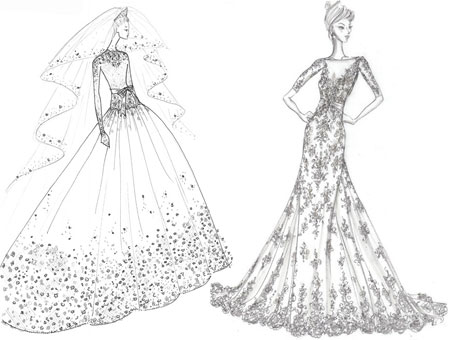