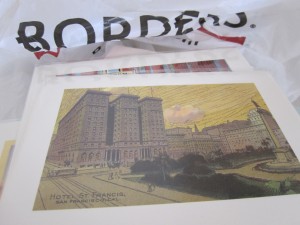 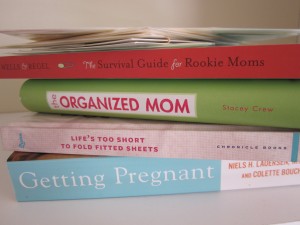 My neighborhood Borders, the one at Union Square, is shutting down for good. Bright orange 60-70% off signs are posted on the windows. Everything must go. The non-functioning cafe was full of bare bookshelves. The third floor was closed.

In a final show of support, I selected four books and four postcards which was quite an accomplishment considering a good majority of the merchandise had already been picked over. Don’t be concerned about the mommy books–the parenting section was one of the few areas that was still well-stocked. I figured, at some point, I will need to get knowledgeable about that baby stuff like making sure your kid sleeps through the night!

The cashiers looked downtrodden. I asked if the Emeryville Borders was the next closest location. “No, it’s Stonestown,” a tall curly-haired kid behind the counter told me as he rang up my books. “But they’re also closing Emeryville. Announcement today said they plan on closing half the stores instead of the third they originally announced. Stonestown is the only one that makes a profit.” He rolled his eyes.

“Because the school’s over there.” He was referring to SF State.

I spent many nights at the Emeryville Borders when I lived over there, and hours browsing around the one in Union Square. Very sad to see the locations dwindling, but hopeful that the Borders brand will endure. Good luck, Borders, I will miss you.