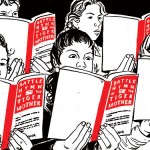 Speaking of NYC, Po Bronson has written a follow-up in NY Magazine to Amy Chua’s much-debated memoir Battle Hymn of the Tiger Mother. Let’s face it, the public has vehemently demonized Chua. She won’t be getting nominated for mother of the year award any time soon. Ironically, given the public’s dislike, the book has been topping the sales charts. If people hate Chua so much, why then are they buying her book?

Bronson poses, “Parents have had no trouble laying down $25 and sacrificing five hours of late-night television to soak up Chua’s story. And this speaks to a dirty secret, something unmentioned in the official public backlash: American mothers and fathers are dying for permission to be a little tougher on their kids…The point is, kids don’t want to suck at sports, they don’t like being lost in math class, and they don’t enjoy the distorted aural contours emanating from their instruments. The cheering is nice, but they’d prefer that someone actually teach them how to improve…Chua may be too extreme to adopt as a role model, but that doesn’t mean these parents won’t turn to her book as their guide.”

Now that some of the storm has died down, I appreciate the different perspective Bronson offers. I have yet to sign in Amazon to 1-click order the book (it’s sitting in my saved items), but I’m glad for Amy Chua. Wealth is sweet revenge.