I guess the last straw for me was when I found out a good friend of mine had a baby–and I didn’t even know. Granted, my good friend is a guy so I had no idea his wife was about to pop. But still. That’s pretty bad.

I rely on Twitter and Facebook to keep me abreast of a lot of this stuff. I rely so much on these killer apps that I’ve come to take the information for granted. Now it’s time to get focused. I don’t want another situation like that–whether it’s a baby, an engagement, a marriage–to catch me off guard again. I thought I was a better friend than that. Clearly not.

I’m going to own my problems and not blame Facebook–even though Facebook, you’ve got a long way to go! With all that funding coming your way, can you please work out the kinks?! But my solution for now is to purge. Animal profiles? Deleted them. In-laws I’ve never met? Gone! My own family members I’ve never met. See ya! Sure we’re family, first cousins, second cousins, aunts, uncles, but do you really care what I’m up to if you’ve never even seen me face-to-face? And probably never will. When’s the next time you’re taking a vacation in America? Probably never. When’s the next time I’m going to the Philippines? I won’t say never, but it’s going to be a long time from now.

It feels good. It feels liberating. Who else can I purge?

Here’s a funny image I found on the web. 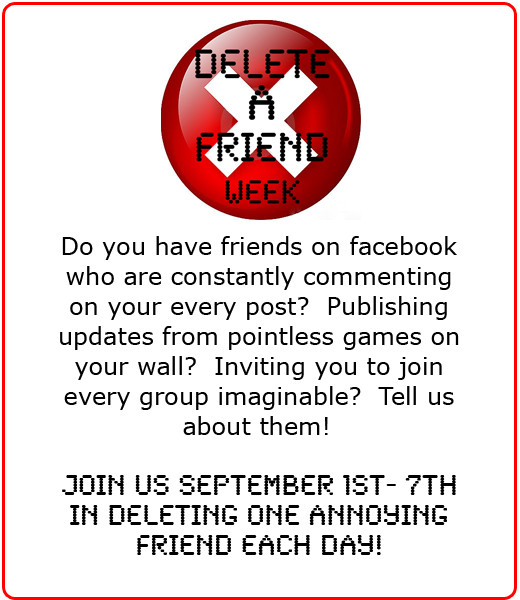