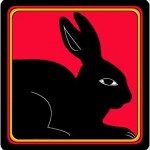 Happy Chinese New Year. It’s my year–the year of the rabbit. I don’t know much about the Chinese zodiac so I googled this which I thought was really interesting and funny!

According to one Chinese legend the 12 animals argued as to who would be the first animal in the 12-year cycle. The gods decided to hold a contest in which the animals must cross a river. The first animal to cross the river would be the first on the chart followed by the other animals according to their finish. The rat was the smallest of the animals and was expected by the other animals to finish last. Quickly the 12 animals jumped into the river but unknown to the ox, the rat had jumped on his back. As the ox was about to jump on the riverbank to claim first place, the rat jumped off his back and won the race. The pig that was very lazy ended up last. As expected, their peers often tease most children who were born in the year of the pig.

I’m in the top quartile of the zodiac so a lot quicker than the lazy pig. Poor pigs! You can read more including traits that coincide with your animal here. Great site.