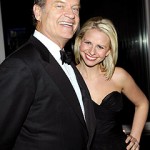 Let’s talk about love again. This time, I’m calling out Kelsey Grammer. Despite the fact that I love his show Frasier, I think the man is a complete idiot!

Don’t you think he’d take his time and have a very long engagement before getting hitched for the fourth time? I’ll admit that Dean and I were engaged very soon after we met, and sure we got married a year later, but we’re both old, hadn’t been in failed marriages, and we were ready.

The airline stewardess Kelsey’s engaged to will be his fourth wife. After three failed marriages, wouldn’t you want to take time to assess what happened, what you can do better, and how you can make sure it doesn’t happen again?

But no, not Kelsey. He quickly falls in love with someone half his age, impregnates her, leaves his wife, and now he wants to get married as soon as possible. He says, “Kayte and I are marrying because we are engaged, and we are engaged because we are in love and see no reason to postpone our happiness any longer.” Wasn’t he happy and in love the other three times he got married?!

This guy deserves to have all his wealth taken away by his ex-wives. He’s so dumb.