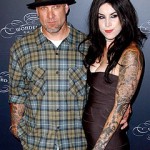 I am so fucking tired after waking up at 3:45am yesterday and working a 13 hour day. Now it’s 4pm and I don’t know where the day has gone. Can a girl surf the web for a few minutes during a work day? What’s the weather like outside? I wouldn’t know. After a week of burgers, onion rings, dim sum, and little sleep, I need a serious perk-up. A thai massage, luxe mani/pedi, and facial sounds like the perfect antidote!

Since I’ve been out of commission for almost week, I’ll post some quick thoughts or interesting things I’ve come across.

Let’s talk about love. I see that Sandra Bullock’s ex-hubby Jesse James proposed to fully tattoo’d Kat Von D. Is her cooch tatoo’d, too? It hasn’t even been a year since he stomped on the heart of America’s sweetheart and now he’s in love again. Can someone please hand me a voodoo doll of Jesse James so I can needle the fuck out of him?

Here a pathetic quote from him, “You know sometimes the public and press gets it wrong. This is one of those times. 2010 was actually the best year of my life because I fell in love with my best friend. An amazing woman who stood behind me when the world turned their backs,” James tells PEOPLE exclusively. “I have never met anyone so kind and loving and committed to making the world a better place every day. My love for her is beyond description. So honored that she said ‘yes.’ Growing old with her is going to be a f—-n’ blast!”

Did you read that correctly? He said that the year he cheated on his wife and she walked out on him with their adopted son—that was the best year of his life. I don’t think there’s another human being in this world who is more vile right now. I really cannot think of anyone. Kim Jong-Il?  Nope, like him more than Jesse James.