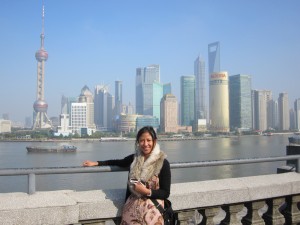 The locals ride up front with the taxi driver which is something I’m not used to. I guess that’s one way to spot an American.

Motorcycles gun down sidewalks and popular promenades (as in on the walkway with the pedestrians).

Prior to my trip, a lot of people said that the Chinese people hack and spit openly. Not something I noticed so I kept a count of how many times I saw that happen–only twice.

The street lights take forever which doesn’t matter if you’re walking; even if it’s green doesn’t mean you should go. But if you’re in a cab, it seems like an eternity waiting for a light to turn green.

Not many American wines on the menu. They’re mainly from Europe or Australia.

I noticed that half the men were carrying man bags. Half the women wear heels.

Sandwich for safety was my big mantra. I’d position myself between two people before walking across the street. The point here is that vehicles have the right of way.

Lots of cigarette smoke which I’m definitely not used to.

Chinese people must live until they’re 100 years old. They smoke, eat greasy food, don’t exercise, and yet…every other person on my flight back home was some aged Chinese person hauling their luggage independently, reading the paper, cradling and rocking their grandchildren to sleep. Fascinating! Filipinos don’t have that kind of stamina (except for Pacquiao) or lifespan.