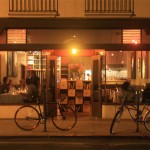 We did bounce back from an awful dinner in Paso Robles with better restaurants in Santa Barbara–Hungry Cat and Julienne. We opted for the five course tasting menu to complement the five star reviews at Julienne. The first two courses started out as expected–delicious appetizers and salads. The next two courses were perfectly-cooked entrees plated to the same proportions as the normal entrees. Umm, we did get the tasting menu, right? My pork belly came out and it was exactly the same size as the guy next to me who ordered it as his entree (not the tasting menu). After the fourth course, we were stuffed. I told Dean, “When you buy me a teacup pig, I’m going to name her Pork Bella because I love pork belly so much.”

We licked our chops ready to end on a sugary note. Peanut butter ice-cream perhaps? Or creme brulee? We’d heard our waitress listing out the choices to other tables. For our fifth course, we got…another huge entree. I thought it was a mistake. “Excuse me, is the fifth course really another entree?” She smiled in the affirmative.

I should also note that Dean and I were never served the same thing. So four different first courses and six different entrees. I think someone needs to show the chef what a standard tasting menu should look like.