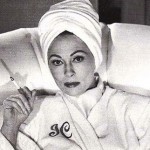 Last night, 45 minutes before the gym closed, I was peacefully sitting in the steam room by myself. The room was barely moist as if there hadn’t been a gust of steam in quite a while. But I’m used to that scenario. It happens sometimes. It’s just the luck of the draw. I still sit in there, breathe deeply in and out, and just relax.

Someone entered and sat down beside me. I paid no heed until she growled, “There’s something wrong. It shouldn’t be like this!”

I opened my eyes to see a haggard Faye Dunaway-look-a-like dressed up in her Mommy Dearest role with a white bath towel wrapped like a turban around her head.

“Yeah, this happens sometimes,” I told her.

“How long have you been here?” She snarled.

“Oh, at least ten minutes. But this happens sometimes. Eventually it will come on.”

“It’s supposed to come on every five minutes. You did something to it. You played with the thermometer!” She screamed.

Hurt, I tried to defend myself. “Look, I never touched that thing. I don’t do anything but come in here and sit down.”

“I never touched it!” I yelled at her.

I tried to call myself down. No one can make you feel bad except yourself. Don’t let it get to you. Brush it off. But I couldn’t stop thinking about it. How dare she accuse me of wrongdoing–something I certainly wasn’t guilty of. And how dare she abruptly switch my demeanor from peacefulness to defense and anger. How do you ignore that incident and not let it get to you. I couldn’t shake it.