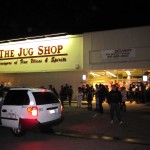 Immediately after last Saturday’s World Series game, we rushed to the Jug Shop in Russian Hill on Polk Street where Mike “The Situation” Sorrentino was signing $27 bottles of Devotion vodka.

I have the biggest crush on this reality TV star. He’s hot. He cracks me up. And that rock-hard body! OMG!

I’ve talked about this in previous posts, but I’m going to say it again. I like him because he is real. Those abs? Those are the real deal. He’s not fake. He’s not acting. He just is: a hot young guy looking for action. 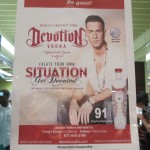 People shake their heads and wonder how the reality show Jersey Shore can be so popular. “It’s so disgusting how much they’re making.” So fucking what! You know what’s more disgusting? John Edwards, who was a potential candidate for the President of the United States, cheating on his wife and impregnating his campaign videographer. But I guess it was ok because his wife was in remission at the time. Very classy, John. Very classy! Or that righteous Attorney General Eliot Spitzer who was constantly pointing out flaws. The married man need only look in the mirror, friggin hiring barely-legal prostitutes. You da man, Spitzer. You da man!

Those are the role models that we should be looking up to? But pooh on The Situation for being such a bad example to society. Look in the mirror, people. Stop being so clueless.

I felt like a teeny bopper waiting in line to see Justin Bieber except half the fans were dressed like Snooki or carbon copies of The Situation. We were toward the end of the line–after two hours of signing–and even then The Situation was really friendly. He let me take two pictures. Plus he re-signed my bottle after I smeared it the first time. 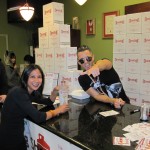 I hope his success continues–if anything to shut up the naysayers.