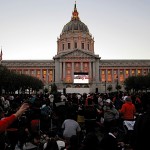 It’s been a wild ride indeed. Me, Dean, and Rob watched the game in front of City Hall. Gavin had promised a setup like the World Cup. Bullshit. There were two mega-screens for the world cup games. But for the SF Giants final game, we had only one screen that was teeny. Plus there were ten times more people last night than the final game of the World Cup. What a logistical joke! But no worries, Gavin, I’m still going to vote for you.

Even though it was difficult to watch the game clearly, it was a lot of fun to be right in the heart of the celebration. We were hugging and high-fiving strangers. Lots of positive energy. Here’s a video clip that I like. 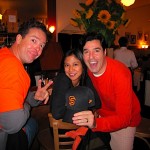 Unfortunately, we had a detour to the Hayes Street Grill because Absinthe was closed. I used to like this restaurant, but now they’re on my shit list. The bartender looked annoyed that we were in there, wearing orange and black t-shirts. So we quickly finished our round of drinks, then headed to Tres Agaves for dinner and more fan excitement. 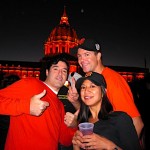 Such a great time to be in San Francisco. Looking forward to the parade tomorrow marching right in front of our office.