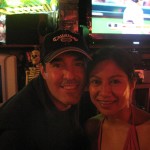 By the time we finished my caesar salad and Dean’s seafood linguini for a very late lunch borderline dinner, it was already 4:30pm—first pitch for Game 6 of the NLCS. We’d gotten carried away wine tasting and I hadn’t allotted enough time to drive, park, and stake some ground at Brophy’s—the sports bar where everyone in town said to watch the Giants game. “Uhhh,” I grunted. “I want to go to Brophy’s, but now it’ll be packed and that won’t be fun standing in a crowd for three hours.” I was annoyed that our plan had fallen through. Dean yelped nearby sports bars on his phone and we settled on Running Iron Saloon which our waitress had dismissed as a really bad dive bar. “Whatever, I just want to watch the game. So pissed.”

I was expecting a bar like Zeitgeist in the city—just as frigid indoors as outdoors, unfriendly locals who think they’re so cool because they hang out at a dive bar, and bad food. But our four hours there was the highlight of the weekend. The bar had a surprisingly cozy atmosphere with dark wood paneling and stuffed animals (the kind that once were alive trouncing along the prairie). Festive orange lights dotted the corners. A plastic skeleton was hanging next to the bar. We sat right in front of a TV. My sour mood turned into delight, “It doesn’t get better than this!” We had an unobstructed view of the game with a fireplace directly to our right and the bar steps to our left.

A local woman, Patty, who grew up in Salinas sat behind us with her husband. As the game intensified, she breathed, “Let’s pray.” Not something you hear in a bar.

“Really? Are you Catholic?”

“Yep, Catholic school all throughout until I went to Berkeley.”

“Get out! Me too and I went to Santa Clara (a Catholic university).”

Another local woman, Sarah, made her way over. “I went to Convent in the city.”

I told her that Convent would be the dream school for my kid, but there was no way we could afford it. I had essentially scratched it off my list of potential schools.

Sarah insisted on trying, “My parents couldn’t afford it either, but there are scholarships. You have to try. They select classes based on merit and potential.”

Patty cried, “Can you believe this? I think this is divine intervention.”

The three of us traded stories with baseball in the background while our husbands watched the game closely. We finally settled back down onto our bar seats when the crowd was on edge. A man walked in from outside and selected a country music song. “Can we get this song turned up? I can’t stand all this baseball crap.”

The bar yelled, “Get the hell outta here, Billy, we’re trying to watch the game!”

“Can I get my song turned up? I can barely hear it!”

We could hear it quite fine, drowning out the baseball commentary. The female bar manager found the jukebox control and put it on mute.

Bottom of the ninth. Prayerful silence until we broke out into cheers.