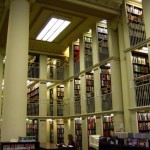 I’ve been feeling really unproductive lately even though I’m one of the most productive people I know.  Marc pointed out while we were watching the Rachel Zoe Project how successful RZ is. “She’s our age and she has her own show on Bravo.”

“She’s like five years older than us, but she looks like she’s in her late forties.  Look at those bags underneath her eyes.”

I’m still jealous, though, because she’s amassed a cult-following of her style and built a brand-recognized fashion empire.

While there are all these people out there who are successful, I’m wasting away my life looking at Facebook and Twitter.  What a time drain and productivity killer.

Would Shakespeare have been so prolific if he had an iPad or iPhone?  I think not which is why I’m giving social media and the internet a time-out.  I became a member of the Mechanics’ Institute which is a private library with long, convenient hours downtown.  It’s been around since 1854.  I sat there for a few hours last week and cleared my brain.  Reading and writing in solitude–exactly how I spent my childhood.  No more distractions.