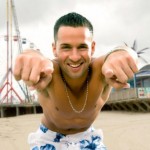 I’ve gotten quite a bit of flak for being a fan of Mike “The Situation” Sorrentino–the reality star on the MTV show Jersey Shore. I swear that guy makes the show. He is eye and ear candy. Why? Because he has abs of steel and he’s super witty. The shit that comes out of his mouth has me in stitches.

I could care less about the others. Although I do have a soft spot for Snooki since we’re the same height. Midgets unite!

I’m going to tell you something that’s shocking. The Situation is real, not at all fake. He’s a player, a sleaze. But you know what I like about him? He owns it. OWNS IT. Meaning he doesn’t try to putz around like he’s super genuine and sweet. He’s just a normal young guy who wants a piece of every hottie on the shore. Most guys his age want the same thing. They just don’t talk about it in public.

He’s honest about it which is more than I can say for all those righteous people out there who poo-poo the guy. This is the world that we live in: “happily” married guys who tuck their kids into bed, then take off their wedding bands when it’s time for a night out with the boys. I can’t tell you how many times committed guys have asked me to set them up with one of my friends. Uhhh, sure, you’re such a quality guy!

I’ve seen it with my own eyes. It happens all the time. I see it so much, I consider it normal. I’m no longer shocked.

Give the guy credit for being completely upfront and real. It’s more than I can say for a lot of people.