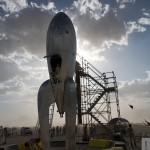 Nothing at Burning Man seems out of the ordinary.  My first year, a U-shaped roller coaster buzzed on the Esplanade.  I was captivated from a distance.  They built that fully-functioning, scream-generating contraption?  Here?  In the middle of the desert? You’ve got to be fucking kidding me.  I walked around–mouth agape–like an 18-year-old virgin at the Mustang Ranch.  Last year, I hailed a fire-engine red, double-decker bus straight out of a scene from a James Bond flick. Wait up!  I’m on my way to Opulent Temple.

There are few surprises after eight consecutive years of burning.  (Except when an arsonist set the Man ablaze prior to the official start of the event in 2007.  That…well that was plain shocking.)  After you’ve seen so many eye-popping, jaw-dropping installations, it’s hard to pinpoint favorites.

Once, in the middle of the night, I biked my way into a field of eggs. The eggs were each two feet tall, glowing luminescence, and perfectly plotted in grid formation.  But the beauty to me was in the sound. Orchestral music streamed from the eggs.  The emanating sound was crisp as if I were in boxed seats at the symphony.  Yet there was no conductor, no musicians, no audience except for the spectators like me who had been lured by the warm light of the eggs. I was so moved by the music that I crouched onto my bike, whimpering, “Oh God, this is beautiful” because I’d rarely experienced that kind of surround-sound amazement–certainly not in church.

The desert landscape–interrupted by Moroccan tents, fire-breathing sculptures, and a very large rubber ducky art car–is my home for about two weeks a year.  The rest of the year, my city landscape consists of cable cars, tourists, Starbucks, Walgreens, and panhandlers. When the two worlds mesh, you can’t contain your excitement.  The Rocketship has landed on Pier 14!  Cars slow to a crawl along the Embarcadero as passengers poke their heads out.  While they’re scratching their heads, you too find it strange to see a piece of art that you’ve only seen in the desert in your city–the place where you work in a high-rise five times a week, forty hours a day.

Burners saw it in construction from three-story scaffolding to its fireworks blastoff.  We also crawled inside, toured the levels, and sat in the pilot’s chair.  The public can only view the rocketship from the outside with its sun-reflecting, mirrored paneling.  While the experience is not the same, it’s still a small but impressive glimpse into our world.

Photo by the fabulous NK Guy.