I’m sick–physically, not sick in the head.  Have had a fever and cold since Saturday that I’ve been unable to shake.

Plus some statements from Wikipedia: “By April 2008, Bush’s disapproval ratings were the highest ever recorded in the 70-year history of the Gallup Poll for any president, with 69% of those polled disapproving of the job Bush was doing as president and 28% approving.  In September 2008, in polls performed by various agencies, Bush’s approval rating ranged from 19%—the lowest ever—to 34% and his disapproval rating stood at 69%. Bush left the White House as one of the most unpopular American presidents, second in unpopularity only to Richard Nixon. 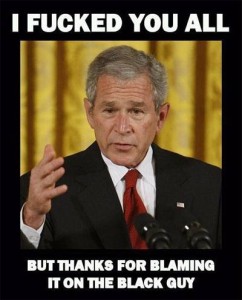