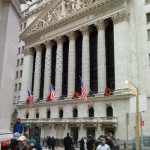 I’ve obviously been out of commission.  It’s that time of year again and this girl works hard for her money.  Anywho, I will play catch up and post some quickie blurbs until I’m caught up.

For all my New York friends or those of you who will be in that area on August 12th, I think you should totally check out the New York Stock Exchange party they’re throwing to showcase their newly renovated trading floor.  If I lived in NYC, I would so be there bopping to the rock band and schmoozing with a bunch of market dweebs.  I mean, come on.  A party at the NYSE!  From the emails I’ve been getting it looks like they’re hurting for people.  Hard to believe.  Recession.  Free food.  Alcohol.  NYSE.