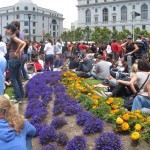 So I’m reading my b-school’s magazine that comes out every quarter and in it are highlights of someone who expected the best and got it.  That’s our very own Dean Snyder who concluded his nine-year tenure with Chicago Booth this past June.  I’ll admit I used to make fun of him, he was so pasty white.  But homeboy did all the work for me.  Chicago wasn’t a great school when I applied.  It was teetering in and out of the top ten.  I applied because its focus was pure quant and that’s what this English major needed to succeed career-wise.  That first year I arrived, we were ranked #2 and its reputation has grown unbelievably since then.

I had lunch a few weeks ago with a friend who graduated last year from a small MBA program.  Even though they offered him a full scholarship, he regrets his decision because their career services department sucks and he’s still jobless.  If you didn’t have a job a month prior to graduation at Chicago, the head of career services sat you down in her office and dialed for jobs.  Literally went through her rolodex name by name until she found someone to hire you.  That’s the kind of leadership and dedication we had, mostly attributable to the Dean.

University President Robert Zimmer said, “Ted was never afraid of being ambitious at the highest level, and never afraid of articulating these ambitions.  The remarkable thing, of course, is that he largely achieved what he set out to do.”  A new business school campus, the Harper Center, was erected during his tenure.  The number of endowed professorships more than doubled.  The school received $300 million—the largest gift ever to the University of Chicago and the biggest donation to any business school.

Dean Snyder said he always remembered the advice George Schultz gave him, “Maintain the integrity of the institution.”

Yale School of Management gets him next.  You fuckers scored.  What a total coup.  I don’t think I need to mention that you’re in good hands.