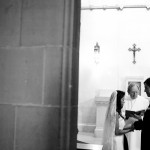 He told me I looked beautiful and he genuinely meant it.  He said he might cry.  “I’d give you a hug, but I don’t want to mess you up,” Marc smiled.

Whereas my friend heightened me to celebrity status, my husband paid me no compliment.  In fact when we saw each other for the first time, Dean breezed by and said, “I have to go find my groomsmen, we’re supposed to be taking pictures now.”  I probably felt the way a spouse does when your partner wins an Academy Award and forgets to thank you.

The ceremony was even shorter than I expected.  Maybe 20 minutes tops.  A prayer and a reading by Dean’s nieces.  I Will’s instead of I Do’s.  A very brief homily that seemed like it was 2 minutes long.  The vows, the rings, and a kiss.

I vaguely remember the photobooth and the boxful of props we’d been collecting.  There was a bar in front of the Ace trailer.  We lit sparklers.  I barely noticed the picture frames we had used as centerpieces.  The DJ had us do all of our dances consecutively—one after the other—which made me mad because my guests needed to eat.  Instead, they were gathered around in a circle watching the dances.  The father-daughter dance to Josh Groban.  Josh Groban, really?  I had preferred my dad’s original oldies selection, but held my tongue when he had made the last minute switch.  It’s not all about me, right?  The mother-son dance to the Beatles.  The anniversary dance to New York, New York.  My cousin Cat sang something to celebrate my Filipino heritage.  I remember the food not looking the way it had when we had done our tasting.  The chicken looked dry and pale.  I heard the tacos which were wheeled around in an ice-cream cart were good.  The chocolate cake was perfect—not too sweet, exactly right.  We had asked the Ace to personalize each table cake with a word or phrase that’s meaningful to us.

Meerkats because we love Meerkat Manor.

Amelie is the wine bar where we met.

Point Break is the play that Dean starred in.

Friday the 13th is the day we met.

Valentine’s Day is when we had our first date.

Hayes Valley is our favorite neighborhood.

Candy Darling is the store we frequent across the street from where we live.

Nob Hill is where Dean proposed.

Canteen is the breakfast spot we frequent.

St. Dominic’s is our parish and where we got married.

The vagina-looking symbol if turned around was really the symbol for Burning Man.

I mentioned before that I don’t like being the center of attention which makes it hard when everyone is asking for a picture.  Plus it’s difficult to have meaningful conversations when there are 120 people wanting to give you a hug or say hello.  I felt like I was unintentionally neglecting everyone.  For anyone who was there, I’m free now!  Give me a call.