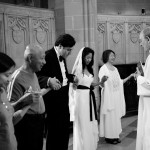 Before I get to the wedding, I thought I’d write about something really ridiculous that we heard while driving home from Palm Springs.  It was a super-conservative, ultra-right-wing talk show where the host was vilifying Obama as a dumbass.  To our horror, it was the only radio station getting reception.  The host was taking comments from callers and as soon as anyone discussed an opposing point of view…CLICK.  Isn’t that totally inconceivable?  As a host, aren’t you supposed to be smart enough to debate an argument instead of hanging up on your callers who make up your audience—even if they disagree with you.  I mean, seriously?!

On and on the host yawps about what an idiot Obama is.  So inexperienced.  No leadership skills.  Hasn’t a clue as to what he’s doing.  Obama’s going to crash and burn.  Fine, the host has a right to his own opinion.  But here’s what one of the callers smartly pointed out.  “Hindsight is 20/20.  You talk about how bad a president Obama is, yet you don’t criticize Bush and the former administration.  Isn’t that something you want to…”  CLICK.

The host volleys, “Stupid caller.  Some people have no idea what they’re talking about.”  Ok, now I realize I’m driving in the middle of cow territory California, but I didn’t realize I’d been transported to clueless middle America.

A subsequent female caller tells the host how he’s doing such a great job, how she listens to his show all the time.  Then she continues, “You are right.  I can’t believe the brainwashing that’s gone on in America.  Don’t people realize that Bush inherited his problems from Clinton.  No one realizes that!”

The host goes on, “Sally, you are one smart woman.  I’m going to send you a fresh homemade apple tart.  Hold the line so we can get your address, alright?”

ARE YOU FUCKING KIDDING ME?

I am not beholden to a political party.  I think it’s extremely sad that people who vote one way believe that they need to align with that political agenda come hell or high water.  For example, I’m a Republican so I have to vote for Palin.  WAKE UP, PEOPLE!  WAKE THE FUCK UP!  I love McCain.  I loved him because he thought outside the box.  But once he picked that under-educated princess from Alaska, I had to draw the line.  Keep in mind that I had campaigned for Hillary Clinton prior to all this.  Same goes for Democrats.  I’m a Democrat so I have to vote for this health care bill because that’s what I’m supposed to do.  T-H-I-N-K!

Next time someone agrees with me, I’ll be sure to send over an apple tart—because most of y’all vote down party lines.