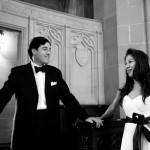 Let’s start with the bad.  I’m not even going to refrain from swearing.  No matter how much planning you do, I understand that there are going to be hiccups.  But I want to vomit when I think of my DJ.  He’s really the only thing that I hated about the wedding.

I don’t remember hearing “I Will Survive,” “Pretty Woman,” “Ice Ice Baby,” Prince, Michael Jackson, or Madonna.  Further, I insisted, “As you can see the majority of my guests are requesting Lady Gaga and Black Eyed Peas, can you please be sure to play several of their songs.”

The mother fucker decided to do his own thing.  I didn’t realize it was his wedding!  If he wasn’t pushing 7 feet tall, I would have bitch-slapped him.  He failed to deliver and I’m ready to post a very negative review.  What a waste of money.  It would have been better to stream music on my iPod for free.  DIE-DIE!