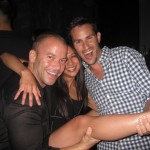 Dean jokes that he has a wife and a surrogate.  He’ll ask me, “Hey honey, how ’bout we go dancing?”

Dean and I decided to drive down separately so he could put in a full day of work on Tuesday.  So Marc and I drove down in his car Tuesday afternoon at 1:30pm.  We made only one pit stop for gas and Carl’s Junior.  I requested a second, to which Marc glared, “Can’t you just hold it.”

By 7:30pm, we were checked into the Palomar Hotel in Westwood and primping for dinner along with Marc’s friend Jason.  It’s been a while since I’ve been to LA.  I don’t know anything about the scene down there, but the scene was alive and strong at Cecconi’s in West Hollywood.  It was plastic and botox central.  Oh, LA, land of the pretty people.

Our bartender was a better-looking version of Johnny Knoxville.

Marc: He’s so checking me out.

Me: You’re full of yourself.  He’s totally looking at me.

Me: Well he’s definitely not looking at Jason.

After dinner and finishing off a bottle of wine after having had a few rounds of drinks at the bar, I was tired.  Jason was tired. Marc screamed, “We’re going out tonight, you losers.  C’mon.”

One block over was the Abbey.  Inside, there were a couple hundred people.  Not packed, but surprisingly busy especially for a Tuesday night.  I was grooving on the dance floor when Jason commented, “Gawd, this place is dead.”  As the boring San Francisco married girl, I loved it.  I wasn’t tired anymore with Lady Gaga playing in the background.  I could’ve danced all night long.