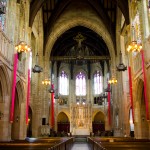 I saw something disturbing on Facebook yesterday.  It came through on my feed because a friend had commented on this person’s status update.  This person was berating his girlfriend for cheating on him and called his girlfriend out by name.  With one exception, all of the responses came out in his favor.  “How dare she?”  “You are so better than her.”  “Hope you are doing ok, buddy.”

The one exception commented, “Posting that on Facebook is poor form.”  Subsequent comments told this so-called friend to fuck off.

I’m a complete stranger to the circumstances.  I’m looking at all of this and I so desperately wanted to hit a ‘like’ button to the one exception.

What’s between you and your girlfriend is between the two of you.  Griping about it in public makes you look like an unclassy crybaby?  Am I wrong here?

When cheating is involved, I can understand you’re looking for the support of your network.  I get that.  I also get that modes of communication these days are so much different than in the past.  But hold your head up high and try, for your own sake, to be the classy one and move on.  Waging a war between you and your network versus your ex-girlfriend is so unfair, especially if she cannot defend herself.

Here’s hoping that she found herself a better guy.